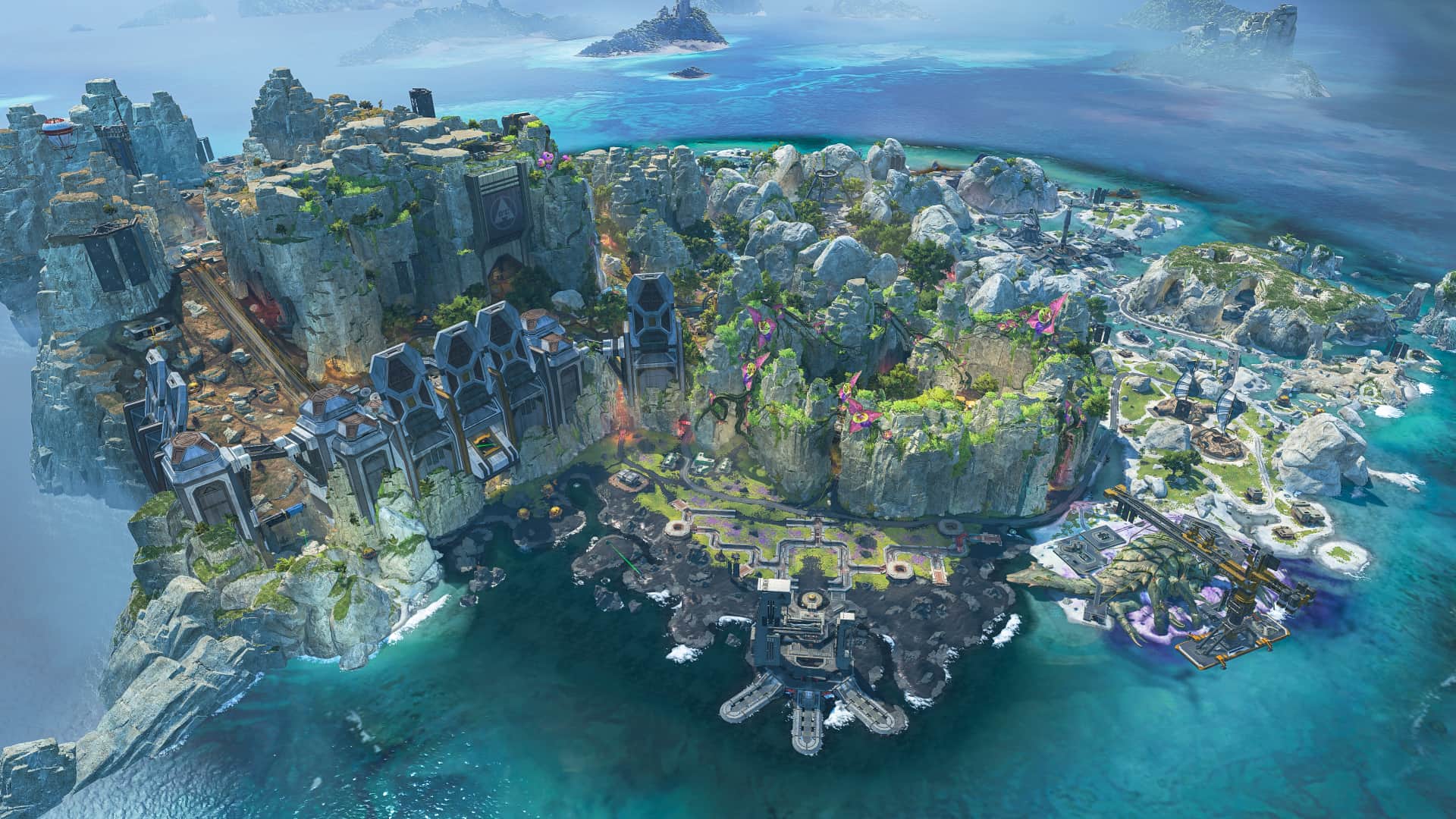 A beast lies on the shores of Storm Point, and IMC Armories have been unearthed, explore and learn more about our monstrous map update.

Hi! I am Keith Jensen, Senior Level Designer on Apex Legends and I am thrilled to present the first map update of Storm Point in Apex Legends: Saviors.

Storm Point is a tropical island paradise surrounded by ocean as far as the eye can see. The dark depths of the ocean contain many secrets, some greater than others. One such mystery is a prehistoric sea creature that has crawled from the depths and landed on the northwest shoreline. Hungry after migration, two of the island’s beloved Leviathans have mysteriously gone missing. Seen as a threat to all the Legends, they set differences aside and work together as a team to triumph over the raging beast.

With this being the first map update to Storm Point, our goal was to add new content and improve map features while not subtracting anything. We added a brand-new POI; a washed up sea creature known as the Downed Beast—which is a unique combat experience for Apex Legends—an organic combat zone, and a refreshing change from man-made architecture. On top of that we added a brand new PvE feature, IMC Armories, at four strategic locations around the map which can dynamically change the championship outcome.

The Ecological Cleanup and Hazard Outreach (ECHO), previously seen on Kings Canyon, have arrived on Storm Point to clean up the mess so the games can continue. However, the enormous dead sea creature will take a long time to remove, and so it transformed what was once a large, empty length of shoreline. This POI is a high tier loot location that connects three rotations: North Pad, Checkpoint and The Mill. On the drop you will see a large crane on a floating barge which is part of the ECHO structures surrounding the Downed Beast. The beast’s hard shell will provide plenty of protection from overhead attacks. The gravity cannon here allows players to assess the top of the beast or quickly flee if the ring is approaching. Teams are encouraged to land on one of the platforms and gather loot at one of the many ECHO tents, then make their way through the interior of the beast …but it could be risky! It might feel intimidating to approach, but you will find a high tier loot zone inside to fight for.

The wide-open jaw, and the four battle wounds make sizable openings on the body that can be used to flank the enemy. Alternatively, the top of the beast can be taken as the position of power to gain the height advantage, and oversee the nearby surrounding activity. Ziplines allow you to quickly take the position on the high ground to confront and eliminate the enemies above. It also gives you the ability to survey your enemies that might be approaching from the nearby POIs. There are multiple ways up for all Legends with common abilities, and this POI offers a full variety of combat opportunities to suit your fighting style, close quarters in the tents, the mid-range interior and long-range exteriors. Also, because of the Downed Beast, multiple Flyers are now attracted to this location and are circling above it waiting to pick at its carcass.

IMC Armories have been dormant underground for decades on Storm Point. Before the war ended, the IMC created these automated combat support structures and stored them deep underground. Originally intended to support IMC Pilots in combat, they were never activated… until now. When the creature emerged a seismic threat was detected. In response the armories activated and rose to the surface.

When you approach the armory, the ramp will automatically open to provide access to the interior. Once inside, you’ll find a payload of weapons and a button to access the valuable loot stored inside of it, which happens to be guarded by Spectres. Activating the armory will close and lock the ramp then initiate combat against multiple waves of Spectres. Survive for 60 seconds and you will receive smart loot that is catered to upgrade your loadout. The more Spectres you can eliminate as a squad, the more loot you’ll receive! Visiting these armories early in the match will have you geared up for the long haul. After completing the challenge, you have the option to eject up into the sky or simply leave the way you came. Your squad can also use the rooftop as advantageous high ground.

We received lots of feedback, data, and telemetry after the launch of Storm Point, so a detailed global tuning pass was crucial to improve the overall minute to minute gameplay. Beyond that, some new decisive changes were made to wildlife: a new prowler camp was added near the Cenote. If you choose to rotate through there you will find a fresh take on the combat experience against Prowlers within a cave and over coral terrain. Another prowler camp southwest of The Mill was improved to be more dynamic, mostly adding more flat rocks and terracing for players and AI to traverse. A spider nest north of the Command Center was also improved by adding a rock archway to bring the nests closer together. Hundreds of smaller QoL updates were done to smooth out the player experience across the map.

I would like to take this opportunity to acknowledge the creativity, dedication and talent of the Apex Legends team. None of this would have been possible without all your teamwork, “slaying the beast” is never an easy task! I want to express my genuine appreciation to the Apex Legends community who continue to support the game all these years. Lastly, sending my warm welcome to all the new players. Please enjoy Apex Legends: Saviors!

There you have it! Stay tuned for more Season 13 info, as the next season draws near.