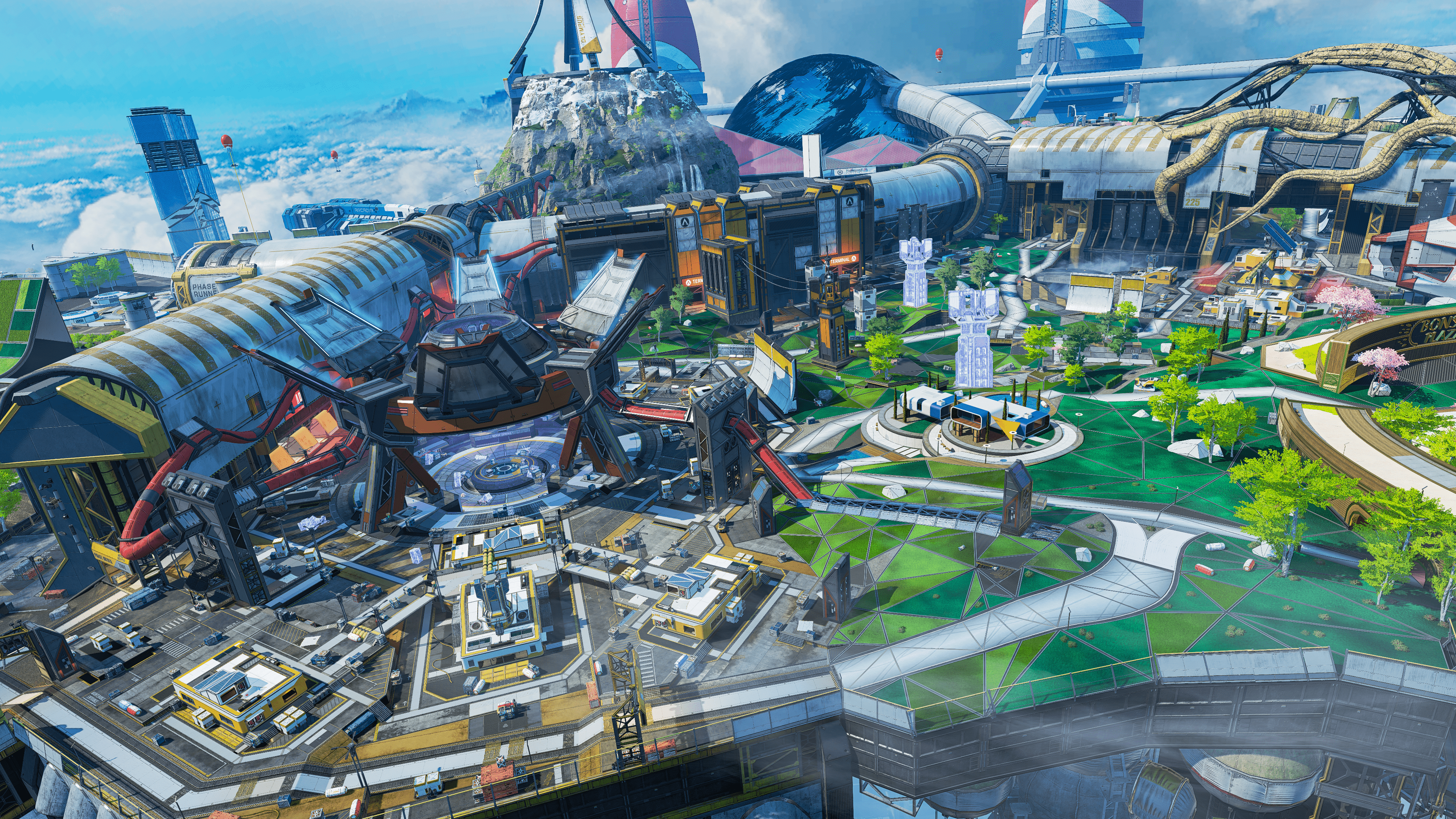 Apparently Mad Maggie’s responsible for the sudden drop in altitude, explore the chaos and learn more about the latest map update for Apex Legends: Defiance.

Despite constant issues, Olympus has always been a test bed for Phase technology. Now, they have a device that can Phase the entire map anywhere they want. It worked too! Well, until it mysteriously malfunctioned… Almost crashing Olympus into the city below and leaving a wake of objects stuck in phase that spawned sporadically around the area…

Phase Driver is located in the newly expanded South side of the map. This new POI is large, but it’s circular flow and open environment around the center device creates various combat situations, so it’s not too hard to get into interesting fights after dropping.

The Phase Driver is also interactive so players can gain high-tier loot from it (more on that below).

Another interesting part of Phase Driver is all the new routing options on this side of the map and how it connects all the surrounding POIs together, offering new ways to experience this area in more purposeful ways.

A new chunk of land has replaced the empty, curved highway bridge connecting Hydroponics to the exterior area of Bonsai Plaza. This and other changes help the outer-edged POIs connect better with more direct paths, so squads who land at Hydroponics and Bonsai don’t always take the same routes out, creating new experiences for players despite landing at classic Olympus POIs.

Although unstable, players can still interact with the Phase Driver. When activated, 3 loot rollers will phase in. At least 1 Gold-Tiered ball is guaranteed each activation and there is a 45 second cooldown before it’s able to be activated again.

What’s a reward without some risk? Therefore, each activation will make a loud noise that can be heard by players in the surrounding area. Alerting others that people are at the Phase Driver looting up, so be alert farming that loot.

Terminal is a large interior POI that acts as a new central routing area for the map. With 5 entry points and exterior elevated platforms, Terminal’s presence and effect on the surrounding area will change the way players flow and engage in the open areas around Labs and Bonsai Plaza.

The interior is designed to keep people flowing and engaging between the platforms/entry points, being visually open enough for opposing squads and 3rd-parties to be spotted before getting too close.

Terminal replaces that lower, exposed choke that went under the Phase Runner connecting Labs to Bonsai. Getting between these two zones is a little easier and more interesting now.

To make room for the new Phase Driver and its components, Olympus needed to expand. Being a modular, connectable floating entity, Olympus connected an entirely new terrain zone on its South side. Because Phase Driver needed to be connected to the Phase Runner, existing areas like Solar Array’s, Icarus’, and Bonsai’s platforms were all pushed out away from the center of Olympus to fit this new chunk of land. For the first time, existing POIs in Apex have moved within the same map without being destroyed!

However, after the Phase Driver’s unexpected malfunction, a shockwave caused this new zone’s artificial terrain plates to glitch and shift in unintended ways. Several objects were also warped and stuck in phased form too.

Raised platforms and small towns create frontlines to engage from and flow between that will make traversing through this area feel fresh and new, drastically changing how squads will play around classic Olympus POIs like Solar Array and Bonsai in their new positions and surrounding environments.

With Bonsai, Icarus, and Solar Array moving out further (along with other redesigns in the connecting terrain areas), the connection between these POIs and Orbital Cannon are more direct now, making Orbital Cannon not feel as isolated anymore.

The long, linear hallway in the North East of Olympus, connecting Turbine to Rift, was a tough choke to go through when enemies trapped you inside, especially in late circles. To help this issue, we added a small, but significant new hallway entry point here.

This will help the flow in this tunnel for combat and will give more options for those multi-team standoffs that occur when the final circle closes here, giving more options for teams to engage and get out of that sticky choke.

MANY SMALL TWEAKS AND ADDITIONS

There were a few tough chokes and scary areas to have to go through in Olympus due to lack of traversal options and harsh elevations, especially for non-mobile Legends. We wanted to help alleviate some of these issues in this update.

To help some of the rotations and routing in Grow Towers, we added another ramp that connects to the terrain against the Phase Runner. This will help players navigate around Grow Towers in late circles without needing to go directly under those towers’ high vantage points, or have to go all the way around through Energy Depot’s linear chokes. I’ve experienced tough, late circle rotations from Labs to Gardens due to these issues.

Several other QoL changes have been implemented, including adding zip lines and other props around the map to help non-mobile players get out of sticky chokes and up to elevated areas better, such as the ramps that surround Bonsai Plaza during final circle engagements.

Some unfair elevated areas that were only accessible to mobile characters have been removed or blocked off, such as the crane arm to the South West of Rift.

To introduce more of a risk/reward to Recon Beacons, some beacons have been moved to less combat effective spots, forcing squads to give up power positions to gain circle knowledge in a few areas like Gardens and Lab’s Waterfall Platform.

We removed 2 highly used Redeploy Balloons, the one in Solar Array and the one outside of Labs. This was to slow squads down from getting between high traffic areas so quickly and flying in to suddenly 3rd-party a fight.

I also added 4 additional lootbins to Oasis on the East side of the POI to introduce a new landing/looting route and alleviate some of the issues of everyone landing at the same 3 spots to loot at this POI. This should allow players to loot a little safer before diving right into the fight and getting punched while looting.

A small, but significant change for those who liked landing Labs and its Waterfall Platform is that the lootbin that always spawned high-tiered loot under the waterfall has moved! It is now at the tri-lootbins at the North edge of Docks.

This was to take some of the heat off of the Labs area of the map and spread squads out more off drop. As no one ever landed along the outer ring of Docks, it would be a cool change to have players out there for guaranteed high-tiered loot and rotate into Docks and its surrounding area for a new Olympus experience.

There are other small QoL changes made to the map, and I hope they all help to make for the best player experience on Olympus yet! This Olympus Map Update was a tough challenge to pull off, but we’re excited for you all to finally play it.

Thank you for playing Apex Legends, and see you all at the launch of Defiance!