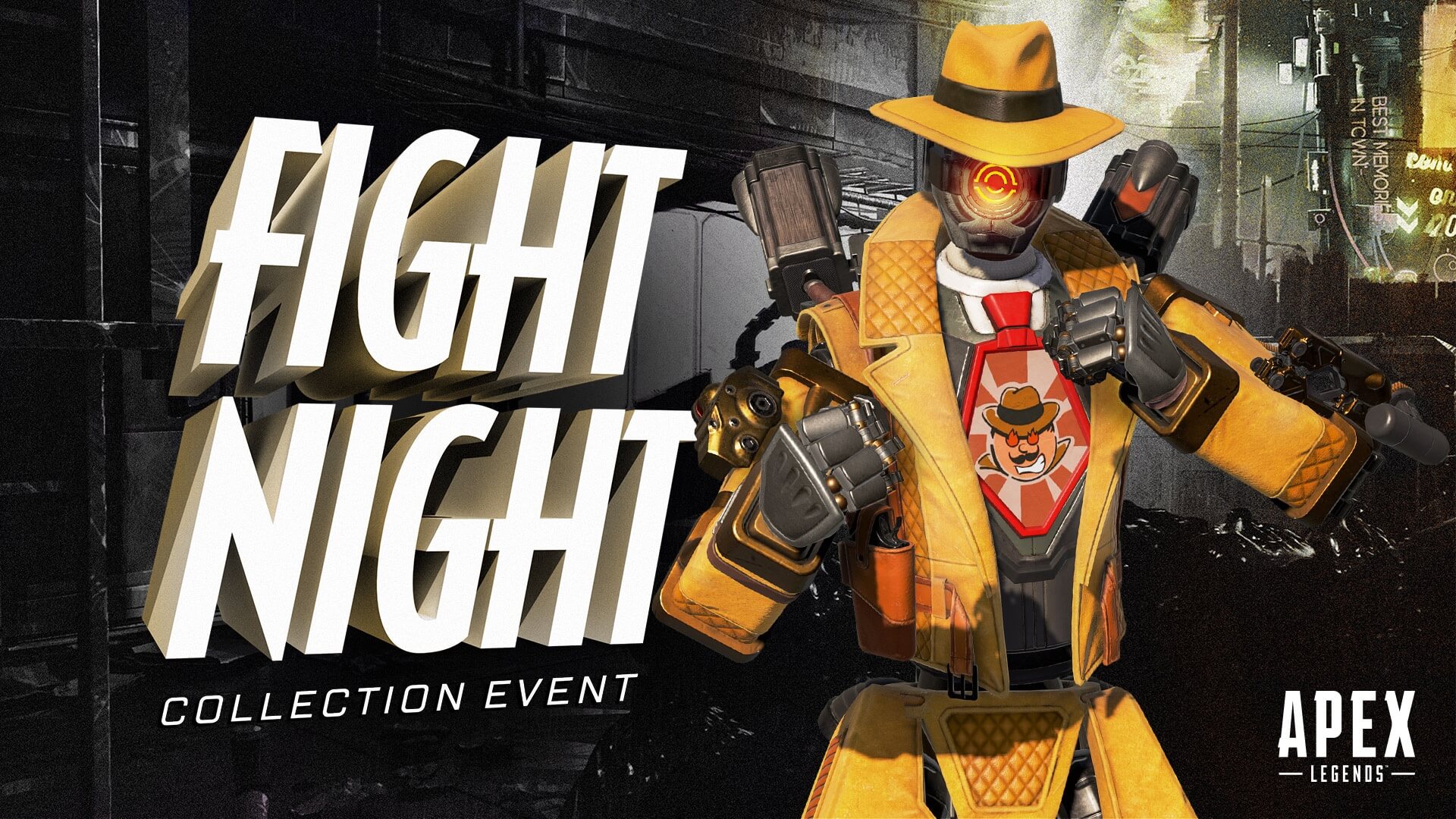 The upcoming collection event is just around the corner. Set to launch next week, here’s all you need to know on what’s coming. Patch Notes for meta updates have released as well and can be found at the bottom.

EA has posted a blog post detailing the event. Check the info below:

Happy New Year, Legends! We’re starting 2021 off with a haymaker with our first Season 7 Collection Event – Fight Night! Going live at 10am PT on January 5th, today we’ll be telling you about it including:

Read on more below for details:

With this update, we’re testing a new approach to LTMs. Instead of launching as its own playlist, the Airdrop Escalation LTM will be a “takeover” of the normal “Play Apex” game mode. It’s classic Battle Royale, but with way, way more supply drops. Immediately after you leave the Jumpship, you’ll find a cluster of four supply drops across the map. During each round, more will drop—they land at the same speed as Lifeline’s Care Packages.

Each supply drop contains a fully-kitted weapon of different tiers, depending on the round. For example, Round one’s drops feature level two kitted weapons while Round four’s drops include red armor and crate weapons. As with regular fully-kitted weapons, you can’t break them down or swap their attachments onto other weapons. And, of course, regular weapons and weapons will still appear as ground loot.

Drop your weapons and get ready for a brawl in Pathfinder’s Town Takeover: Fight Night style.

Entering the ring will prevent any player from using their weapons and any of their abilities. The only way to beat someone is via a bit of fist o’ cuffs. Oh, and don’t worry about any outside ring interference—no outside projectiles, grenades, or abilities can penetrate the ring’s force field.

Punchout the loot balls contained within the ring to scoop up some rare loot. Just remember you can’t use it until you leave!

All 24 items will be available through direct purchase (for Apex Coins or Crafting Metals) and in Event Apex Packs for the entire duration of the event.

Each Event Pack will come with one event item and two non-event items at the following drop rates:

If you want to learn more about how Event-Limited Cosmetics work, visit the EA Apex Legends FAQ.

If you collect all 24 event items, you’ll get the Gibraltar Heirloom.

After the event ends, the Gibraltar Heirloom will become available via heirloom crafting.

As with previous events, this event brings a rewards track with all-new earnable cosmetics:

You can earn 1000 points per day and challenges refresh daily. The challenges also stack with your Battle Pass, so you can complete both at once.

After having been previously decommissioned, MRVNs are now programmed to reward Legends in the arena. Only appearing in Olympus, these friendly guys will give you loot after interacting with them. They’ll produce tiered loot equal to what is shown on their screens.

Pick up your loot and thank your friendly MRVN. Or, if you’re feeling toxic, shoot them. When you do, they may drop their arm for you to store in your inventory. Taking this to another MRVN with the missing piece may get you a reward. Hi-five?

There’s nothing too meta-shaking this time around; we’re giving Season 7 some extra time to shake out. Horizon released strong, but not overpowered. The below buffs are aimed at small power increases. Rampart still needs overall power, and the Caustic buff is an extra bit of compensation for the loss of vision blur from gas in Season 7. Note that looking at our data, the Season 7 change was a solid buff for Caustic, but he’s not quite where we want him to be.

In hopes of spreading out the chaos that can occur in final rings, we’re making some tweaks to Rings 5 and 6.