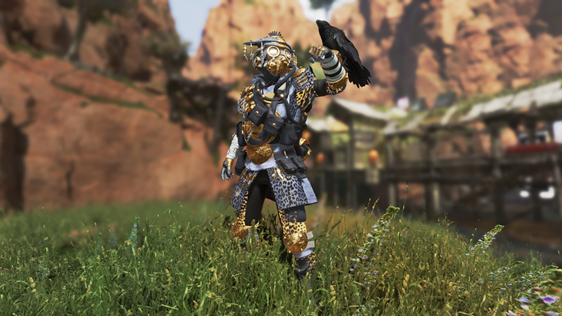 The Apex Legends community manager, Jayfresh_Respawn, took to reddit the ideas and adjustment Respawn has in stock for Apex Legends. Furthermore, many details and changes in how you unlock collectibles from the Battle Pass have been detailed. For example, badges and stat trackers will be removed from the Premium Battle Pass Section. Read the full post below:

As we approach June, we want to give you a heads-up on a fun in-game event coming next week, as well as just some of the first details on Season 2 Battle Pass.
The Hunt Begins . . .
​
Compete in Legendary Hunt challenges to earn this Epic Master of the Hunt Bloodhound skin and more.
Starting next Tuesday, we’ll be kicking off a new event called The Legendary Hunt. This limited-time event will last two weeks, and with it brings all this to Kings Canyon:
​
● Apex Elite Queue
Test yourself against the best with the Apex Elite queue. Make it to the Top 5 in any match to earn your way into a select queue full of other Top 5 winners.
Here’s the catch: in order to continue playing in the queue you will have to keep placing in the Top 5.
​
● Legendary Hunt Challenge Rewards
Complete a set of limited-time challenges and earn new Rare, Epic, and Legendary skins.
​
● Double XP Weekend
From Friday, June 7 at 10 a.m. PST through Monday, June 10 at 10 a.m. PST, earn double XP on base progression and Battle Pass progression.
​
● Battle Pass Bonus XP
Finish Top 5 in any match and earn an entire Battle Pass level (once per day).
​
● Legendary Hunt Store Skins
Every three to four days during the event, we’ll have new Legendary Hunt themed skins rotating through the in-game store for direct purchase.
​
● Two Additional Legendary Skins for all Battle Pass Owners
Players who have the Wild Frontier Battle Pass will automatically get the Legendary Honored Prey R-301 skin.
Players who reach Battle Pass level 15 before the end of the event will get the Wraith Night Terror Legendary skin.
​
​
The Legendary Honored Prey R-301 skin and the Legendary Night Terror Wraith skin.
​
First Details on Season 2 Battle Pass
At 10:00 a.m. PST on Saturday, June 8, we’ll be sharing some of the first details on Apex Legends Season 2 as part of our EA PLAY livestream. Today, we want to tell you about just a few of the high-level improvements you can expect from our second Battle Pass. So, without further ado, we’ll let our Lead Product Manager, Lee Horn, tell you more. Take it away, Lee!
Leeeeeee-RSPN here, with an update on Battle Pass Season 2. We’ve been listening to the community discussion regarding the Season 1 Battle Pass and have gotten a ton of great feedback from players. Today, we’re excited to share just some of the changes and improvements you can expect with the Season 2 Battle Pass, so y’all can know that we’re headed in the right direction.
​
TL;DR ON JUST SOME OF THE IMPROVEMENTS COMING
● Level up via Daily and Weekly Challenges.
● Time to Battle Pass level 100 should be significantly reduced.
● Three additional Legendary skins added to the rewards track.
● Three entirely new content categories replace badge and stat tracker rewards.
● You’ll earn enough Crafting Metal rewards from the full reward track to craft a Legendary item, or whatever your heart desires.
​
Daily/Weekly Challenges and Improving the Grind
Starting in Season 2, you’ll be able to complete a mix of Daily and Weekly Challenges to level up your Battle Pass. If you miss a few weeks or start late, your Weekly Challenges will still be around for you when you return, and you can complete them all at once.
While we don’t want to introduce wacky challenges that drastically warp the way you play the game, these challenges should provide some interesting variation from game-to-game. This means all players should feel more rapid Battle Pass progression and the journey will hopefully be more fun and interesting. Also, this addition should allow players who can only dedicate a few hours a week to the game to make a very deep cut into their Battle Pass progression.
​
Moar Legendaries!
We’re adding three Legendary items to the Battle Pass and there will now be a Legendary item every 25 Battle Pass levels in the premium track, including at purchase (that’s level 1, level 25, level 50, level 75, and level 100). Our goal is to have a nice balance of cool character exclusives and cosmetics for everyone (like weapon skins). The level 100 reward will be an evolving weapon skin with a special recolor version for those players who make it to level 110.
​
New Cosmetic Types and No Badge or Stat Tracker Rewards on Premium Path
We removed badges and basic stat trackers completely from the premium Battle Pass rewards track for Season 2. You’ll still get a seasonal badge, but it’ll be a single, evolving badge that won’t take up any additional reward slots! We’ve kept seasonal win trackers in the free path, and they will all be earnable in the first 10 levels.
You’ll also be able to earn items from three new content categories in place of badges/trackers. We’ll be revealing details about these categories closer to the launch of Season 2.
​
Earn Enough Crafting Metals for a Legendary Item
We’re replacing the Voice Lines with Crafting Metal rewards. You’ll now be able to earn enough Crafting Metals (1,200) to craft the Legendary item of your choosing. So, if there’s an existing item you’ve been coveting, you’ll be able to get it in Season 2. You can still get additional Crafting Metals from the various Apex Pack rewards in the Battle Pass as well.
We have a lot more to tell you about what you can expect in Season 2, so make sure you tune into our livestream on Saturday, June 8 to hear what else we have in store.